What I Learned Today: Good Idea Plus No Planning Equals Horrible 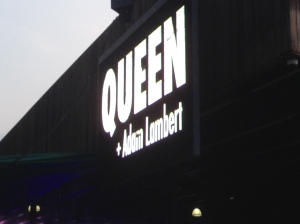 A good idea horribly implemented and with no follow through is worse than no idea at all.

I live about 10 minutes away from Merriweather Post Pavilion, one of the best outdoor concert venues in the country. My wife and I are both fans of Queen and we both like Adam Lambert. When we realized a few weeks ago they were playing Merriweather, we bought tickets.

Fantastic. All set. Excited. We’ve been to a few concerts there, enjoyed ourselves. Loved the experience. I’m looking forward to hearing Fat Bottom Girls.

Received a pre-event email on Saturday, register on our Facebook page for our Gatecrashers event. Get in at 5:30. Get a good lawn seat. Have a little food and adult beverage before the doors open to everyone at 6:30. The only instructions were go to the South Entrance.

Sweet. Great idea. We’re not doing anything. Have a little food, get in a little early. Get a good parking spot. Relax. Right?

It seems that for a venue that puts on major acts throughout the summer has no social media plan and not very good event management or marketing skills.

We get there and there’s a line, but no one knows if this is the line for 6:30 entrance or for the Gatecrashers (it’s Queen, people wanted good seats so they lined up early). I stayed in line while my wife went to the gate. She calls — come up, the Gatecrasher line is to the left. This is about 5:30, when the gates should open for use “Gatecrashers.” The Facebook page is semi-active with some happy people about to get in early, get happy, and see Queen.

Then it went bad wrong.

We looped around to the front. After milling around with a group of other pissed off Gatecrashers, ONE of about 5 staff milling around talked to us. Stay here, we’ll figure this out. Don’t think she ever came back.

A few lessons learned for me:

Unlike others, the proximity and the acts will keep me going back to Merriweather, but I’m sure they’ve lost some customers for life now.

As for Queen with Adam Lambert – AWESOME (including Fat Bottom Girls).