Gettysburg – One of My Favorite Places (#AtoZchallenge)

Written by bryantduhonPosted on April 9, 201510 Comments 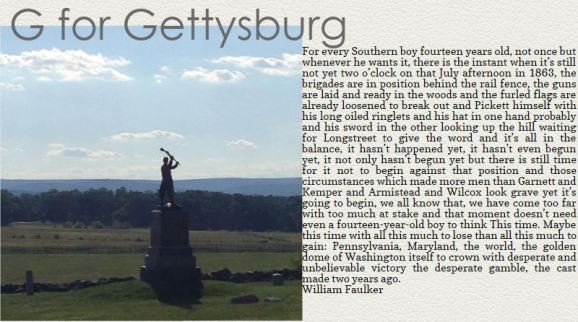 My love affair with the Civil War began with a question to my Meme. I must’ve been 7 or 8. I can’t remember the exact question, but I remember Meme and Pawpan were sitting in their respective chairs in the living room when I asked. She got up and pulled the “C” (I think it was, it may have been “G”) volume of the World Book Encyclopedia from the shelf and opened it to the Civil War section. On the left hand side, covering most of the page, was a segment of Phillippoteaux’s Gettysburg Cyclorama painting.

I soon began reading about the history of the war with Bruce Catton’s book written for American Heritage (I still love the battle maps in that book). I still have the Frank Leslie’s Illustrated History of the Civil War coffee table book Meme and Pawpan bought me soon after at the Waldenbooks in the mall. As a good southern boy, I generally got depressed reading about the battles after Gettysburg, because, “We” lost.

It was primarily because of that moment in my life that I applied to the US Military Academy (almost got in) as well as receiving a Marine ROTC scholarship to Tulane (declined while waiting for the Army to tell me no, bastards). It also started a life-long fascination with military history, combat, and warfare.

My views have changed since then and I’m over the Lost Cause mythology – while not only about slavery, without slavery I seriously doubt there would have been a war. And I no longer view war as a “proving ground for manhood” but as a horrible waste to be avoided when at all possible. Though I do wonder now and then what my life would’ve been like had I said “yes” to that ROTC scholarship all these years ago. It’s hard not to wonder how I would’ve measured up.

And it was the battles that initially made the blood pump – Shiloh, First and Second Mannassas, Antietam, the Seven Days, Spotsylvania, Fredericksburg, Cold Harbor, Nashville, Franklin, Murfreesboro, Chancellorsville, the Wilderness, Petersburg, and, of course, Gettysburg.

While my interest has shifted over the years to include other aspects – politics, soldiers’ lives, photography then and now, grieving and loss, guerilla campaigns, etc. – it’s the battles that shape war.

And Gettysburg is a battle that truly shaped the war.

Oddly enough, it wasn’t until I had lived in Gaithersburg, MD for a year (and that after a year of living in DC) that I finally realized how close I was to Gettysburg. Coming from the south, I had (and still have) a hard time remembering that New York is only 200 miles from here (a 4 hour drive on a good day) and that I can be in Philly in under 2 hours. When I moved here originally, Gettysburg still felt far away – even though it’s only an hour or so drive.

Well, once I realized how close everything really is, the tours commenced. I’ve visited all of the major battlefields (and a lot of smaller ones) in the area — most at least a few times each. Twenty years and counting, Gettysburg holds a special place. Antietam (not least because of Nutters Ice Cream – go there if ever in the area), Chancellorsville, Monocacy, and all of the others have their charms; but Gettysburg is different. I’ve probably gone 50 times at least – by myself, with my dog, with kids (now banned), with my Dad, with my wife (also now banned), with friends – for the day or just a few hours. Each time, I feel like I’ve learned or seen something new (even with a chorus of “You’re going to read ANOTHER sign” ringing in my ears – the reason for the kid/wife banishment).

I’ve walked and driven around nearly the entirety of the field – and still want to do the horseback tour for a different perspective. I’ve watched the Park Service efforts to restore the field, as much as possible, to its appearance at the time of the battle – which has been amazing to see as lines of sight are restored, fences rebuilt, and orchards replanted. I was with my Dad at the reenactment of the battle in 2000, when the Observation Tower was demolished. At the end of the battle, they pointed all of the canons at the observation tower in the distance and timed their shot with the demolition charges of the tower (its disappearance made a huge difference in the look of the field, while glad it’s gone I regret never having gone up it prior to demolition). I’ve walked in the footsteps of Pickett’s men. I still get a shiver of awe when I think about the 135th reenactment – one of the largest and with a very similar layout and number of reenactors to Pickett’s Charge (properly Longstreet’s Assault). When 12,000 Confederate reenactors stepped out as one from the tree line and began to advance . . . it was as close to seeing what history looked like as we’re ever going to get. One birthday, I went for a 7 mile hike (and Lauren went for a 5 mile hike and a 2 mile shoulder ride) around the 1st day battle sites north of town. I’ve been when it’s cold, sunny, windy, calm, raining, and hot. Picked ticks off of Oscar (and Foster before him) – and myself. Stood where Lee and Longstreet made the decision to continue the battle. Forced my way through the brush (before a new trail was added) to find the extreme left of the Union line where Chamberlain launched his counterattack down Little Round Top. Stood near where Lincoln gave his address. Pondered the irony of General Armistead, nephew of the commander of Fort McHenry, mortally wounded on the Union side of the stone wall as the Confederate tide ebbed, fighting against the country his uncle helped save that night in 1814.

My mind fills with a deluge of memories – too many to recount here. I often think of Meme and Pawpan and the encyclopedia pages opening to that image of the cyclorama. And still as I type this I find myself wanting to pack up and head up for a quick day trip.

Why? What’s so fascinating about Gettysburg? There are some good toy soldier shops. A few nice places to eat – Farnsworth House is one and there’s a good diner off of the square. Some nice (and overpriced for the tourists) antique shops. The new museum and visitor center is top rate. It’s an easy drive and good exercise to walk around for a few miles. But I can buy toys online, there are better restaurants around the corner, and I can open my door and walk.

It’s not so much the standing where an event happened and being able to read about it – about what happened there, exactly where you stand. You can do that at the other fields too – I’ve got the books!

What it is, for me, is that Gettysburg is one of the places where the history of world shifted. Had any number of different pieces of luck and timing gone the way of the Confederates – the Union army scatters and the way is open to Philadelphia, Washington, Baltimore . . . and the south has a victory on northern soil. Gettysburg is a place where “what might have been” is just the other side of here. So close you can feel it in the imagined echo of the canon and rifle fire and wonder how different the world would be had Stuart returned sooner, had Reynolds not been first on the field, had Meade decided to withdraw, had Ewell moved faster, had acoustics meant that intended flank attacks started hours apart, had Warren not scouted Little Round Top and found Union troops to send to the top just as Confederate soldiers were coming up the other side.

And the history of the world did pivot based on the actions of those men. Had it turned out differently, the world is a very different place today. There are likely 4 major countries in North America. World War I possibly turns out differently without US intervention. WW II doesn’t happen – maybe even no Hitler and no Holocaust. Who knows. I’m sure there’d be a different litany of pain and woe in the world – or maybe the world would have been more peaceful.

But it did happen the way it did. The Confederacy wasn’t doomed to lose after Gettysburg – there were missed chances afterwards for the South to extend the war. But Gettysburg is the first time that the Army of the Potomac went toe-to-toe with the Army of Northern Virginia and gave more than it got.

I go back to stand in awe of the bravery of the men on that field.

And I go back for the echoes.

*The Gettysburg Cyclorama is an awesome piece of historical record. Painted on a massive scale (42 feet tall) and showing the “highpoint of the confederacy” in Pickett’s charge, it is quite the thing to see. Even cooler, walk outside for a few minutes and you’re there – beside Meade’s HQ or the Brian Farm or the Copse of Trees or the Apex and the “High Tide of the Confederacy” – right there where history happened.