Jam, Jelly, and the #AtoZchallenge 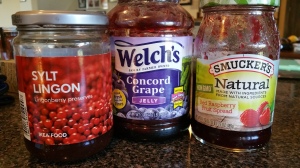 Jam has got to be one of those words that drive non-native speakers nuts. It’s an adjective, a noun, a verb, and an adverb (I’m pretty sure jammy is an adverb, I’m not looking it up). Something you eat. An impatient action. A situation.

I’ve never been a huge fan of jam (the foodstuff). Or just jamming it in there (especially if you need to get it out again). I hate being in a jam, but like to think I’m there to get friends and family out of when if they need help.

We be jammin’.
Jam it in there.
It’s jammed
Jammy Dodgers (one of Casey’s favorite cookies).
Pass me the jam, please.
Crap, I jammed the gears.
I used to love hosting tweet jams. Though I had to rename them because some people I used to work with are fu . . . , well, shall we just say, healthy sense of self.

I’ve said “jambone” before, but for the life of my I can’t think why. A quick Google search shows that it’s the name of a “euchre hand that is played with the bidder’s cards exposed on the table” and also a band and a harmonica. Maybe it’s related to the harmonica. I’ve played quite a bit of card games in my life (Uno, Rook, Aces, Attach Uno, old maid, slap jack, gin, gin rummy, Milles Bournes – which we just gleefully call coupe do four because we’re Coonasses that way, solitaire, clock solitaire, spades, a variety of poker games, cribbage, hearts, go fish, war, concentration, some drinking game with cards on your heard or something I don’t know I was DRINKING, and I’m VERY much looking forward to getting my Exploding Kittens deck — yes, gloriously, this is a real thing. And goats.).

Jelly is pretty good too, and very similar – at least when it comes to fruit spread. I actually did look this up. Pretty interesting, results and link to article at the end of this. I find that I prefer jam to jelly, but I like marmalade as well.

Jelly roll pan is probably the most frequently used cooking item in my kitchen – vegetables, French fries, roasted vegetables – cauliflower recently, not to mention the variety of crap foods from the freezer section we heat up on them it (waaaaaaaay less than in the past 7 years).

When “jelly roll” comes up in a blues song, I always assume something appropriately nasty is going on. Jelly Roll Morton must’ve been an awesome dude to hang out with. And while I’m pretty sure I’ve could’ve handled the jelly, not sure I want to – at least from what I remember of the video. Or was that Tootsie Roll? Either way, I could’ve owned that.

So, there really is a different between jam, jelly, compote (I knew that), marmalade. Everything below, except for snarky comments, is from The Difference Between Jam, Jelly, Compote, and Conserves on Serious Eats.

Marmalade is derived from the Greek melimelon, which refers to quince stored in honey. I have no idea what a quince is, but I want to try one now. The big difference in marmalade today is that it’s usually citrus jelly with bits of rind.

Jellies and jams didn’t really become widespread until the 1800s, when sugar became cheap. Before then, the Romans and Greeks knew about the preservative abilities of sugar, but used honey to store fruit because of the expense of honey. It sucks that the prevalence of sugar and sweeteners have contributed to obesity, but, damn  do I feel lucky that candy is cheap (though, the 25 cent candy bar no longer exists. I’m continually shocked that it’s usually a buck or so when I buy a Snickers bar.  A sure sign of the Apocalypse and also of age. In reality news: get off my lawn you damn kids!)

Jelly mainly differs from jam in that it’s strained and contains no fruit solids. Both are generally cooked, but with jellies the fruit is usually crushed and cook to get the juice.

Anyway, you may have known this. I had never thought about any of it before, so I was intrigued throughout the article.

And that’s my J #AtoZchallenge, and combined with Stream of Consciousness.