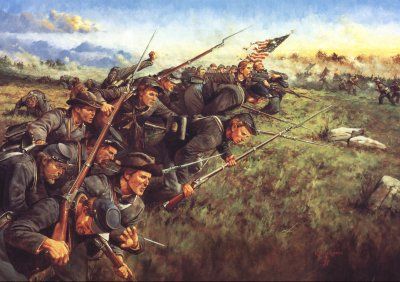 I am fascinated by war. I love to read military history. I increasingly enjoy learning about the broader strategy and logistics beyond the battlefield strategy and tactics.

It’s self-sacrifice. And courage. And bravery. And genius. And pageantry. And heroism. The Keith Rocco print to the right here exemplifies this to me. It’s of the charge of the 1st Minnesota at Gettysburg on the Second Day. Chamberlain gets more press and attention, but without those 262 (47 answered roll the next day) men hurling themselves at 2,000 Confederates whowerethiscloseto piercing the Union line, maybe Gettysburg ends differently.*

At the same time, it’s horrifying. And terrible. And cowardice. And stupidity. And venality.

It is wanton destruction. It is waste on an immense scale – of material, opportunity, industry, insight, energy, and, of course, life. Picasso’s Guernica perfectly captures the horror of war and destruction. Strange how sometimes the photos remove you from the horror while a painting can make it real. And while I am a believer in the awful to say, but probably true that some people need killing, there must be a better way to settle our disputes (obviously personally, you can’t just go around killing people) on a state-to-state level.

Maybe the Yanomamo in the Amazon have it right (if I’m remembering the details right from my Anthropology class in 1990). Disputes are often settled by all the men in the conflicting villages whacking each other with sticks until one side gives. Last man with a stick standing wins. You get bruised, but you don’t die. Or maybe there was something to the “Land of Confusion” video and Reagan and Gorbachev could’ve just duked it out – old man to slightly younger old man.

Because I don’t see single combat making a comeback, I see no end in sight. There are bad people in the world who won’t stop unless stopped. Though I struggle with the futility of it all sometimes. Thurber’s “The Last Flower” really got me thinking in a different direction about war the first time I saw it – sometime in high school (video of the book’s pages here).

I am often in awe of the courage that it takes to overcome fear to go into battle. I sometimes wonder what my life would have been like had I been commissioned into the Marine Corps. By now, I’d be retired. Or wounded. Or dead. Or maybe I would’ve even moved up the chain and be on my way to being a Major or a Colonel. I would have seen combat, almost certainly, had my life gone in that direction.

And, I can’t help but wonder as I read Unbroken, or Band of Brothers, or Black Hawk Down: How would I have done? Would I have been good enough? I like to think I would have been. Hopefully, at this point in my life, I never have to find out because if guys my age are being recruited, something’s gone bad wrong. By the way, all three of those books are excellent and Band of Brothers is a fantastic mini-series.

To be a little tongue-in-cheek, “War! . .  What is it good for? Absolutely nothing.” Well, maybe not, when Eric Burden declared war we got “Spill the Wine” and “Low Rider” out of it, so some War, of the musical variety, is good! There is nothing more awesome than having “Low. Rider.” pop up on the radio when you’re driving. It makes you want to lean your seat back a little more and cruise – one hand on the wheel and the other hanging out the window.

And, Spill the Wine. Really, “the fact that me, an overfed, long-haired, leaping gnome should be the star of this Hollywood movie.”

Someone had spilled a bottle or three down their throat when they wrote that. Anyway.

War and combat has also furnished me with one of my hobbies of choice – toy soldier collecting. I started off with plastic army men as a kid (I still have my marines and Japanese combined from my Iwo Jima set – thanks Mama, for getting rid of the mountain! Not! – and another playset.). I segued into 1/72 scale miniatures for a bit. Then Britain’s plastic soldiers and Corgi armored vehicles (most of which I still have). And then about 20 years ago, I started buying metals – Russian miniatures from the St. Petersburg Collection, Conte, Britain’s, King and Country, First Legion, and others are now all mixed in together. As with my last post, it’s all “very varied” in what I collect, but is mostly centered around the American Civil War and Knights, with a smattering of Creeks, barbarians, Romans, and other ancient figures that I find attractive mixed in. 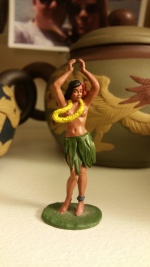 My favorite figure of all might be my hula girl though. Found her in Le Petit Toy Soldier shop on Royale in New Orleans, which, sadly, didn’t survive Katrina.

Toy soldier stores are some of my favorite stores going – there are a few in Gettysburg that I like. Book stores are also awesome. And I love a museum as well. I suppose the ideal would be a museum with a book store that also sells toy soldiers – the visitors’ center in Gettysburg comes close, but the toy soldier selection isn’t very good.

Philosophy and art. The philosophy of art