Come on baby, light my fire

Break on through to the other side.

Love me two times! [mmmmm, hmmmm, like the sound o’ that!]

I’ve had The Doors songs running through my head ever since seeing today’s prompt for Stream of Consciousness Saturday. You guessed it, doors – specifica

lly a door you walked through this week that wasn’t your own.

Given I work at home and we’ve been getting Hello, Fresh deliveries (generally, pretty good – and has probably saved us money by not ordering out and we’re eating a bit healthier), the only strange door I walked through this week was our regular booze store last night.

Theoretically, this was going to be a dry February. It ended up a bit wetter than we originally envisioned, though we did drink a good bit less this month (Superbowl excepted).

Tonight I’ll be walking through the door of Katana, the best sushi restaurant I’ve ever had, though I’m thinking Pad Thai tonight and only a bit of sushi. You can get your sushi on a sushi boat. I find that awesome.

Lauren in front of her sushi boat for her 19th birthday. 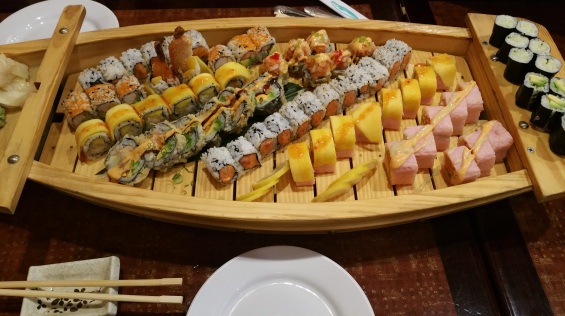 The other thing I thought of was the Bilbo Baggins quote in the photo,

Doorways are always associated with adventure and trying something new.

Not many adventures this week or recently. I’ve hardly been able to walk since the 2nd week of December. Started with my left tendon in my ankle just hurting like hell. By the time that calmed down, my right foot had gotten a sprain, then when THAT got better, the left foot started hurting again and then my right ankle swole up so badly for two days that I couldn’t hardly put weight on either foot.

It sucked. Badly. I have a lot more sympathy for folks who deal with chronic pain and have mobility issues.

It’s finally nice to be able to put my foot on the floor and not wince in pain. Even managed to walk the dogs an entire week in a row.

Looking forward to walking out the door and seeing where the road takes me in the coming months. Trip to San Antonio in a few weeks – looking forward to seeing the Alamo again and enjoying the Riverwalk.

Locally, I think there’s a Civil War battlefield with Oscar and Knox in the near future. The National Zoo. There are few museum exhibits that look interesting. Time to get out for some more adventures. We do have a mini-adventure in New York in August to see George’s old man crush, Rod Stewart, at Madison Square Garden. That’ll be a good time.

But, since I didn’t get out much this week, I’ll leave you with the doors I did walk through (not the liquor store, picture your garden-variety glass door – beer cooler and aisles of lovely booze glistening in the background – and you know what it looks like). Been going to the liquor store for 9 years. We only just figured out the owners name – Ernie. And we still don’t know the name of his son, the older guy, or the guy with the beard. Though we have had conversations with all of them 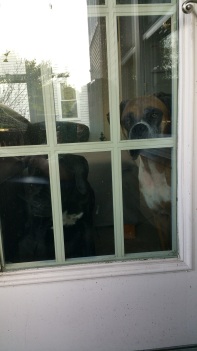 This would be the door from our kitchen onto a small deck.

That’s Oscar on the right and a puppy Knox on the left. It’s a nice spot for a cup of tea or a drink when the weather is nice. The door stays shut from December through February for the most part, excepting when Louie or Sasha go outside and freeze for a few minutes.

Click on images for captions. Or not. It’s a free country. 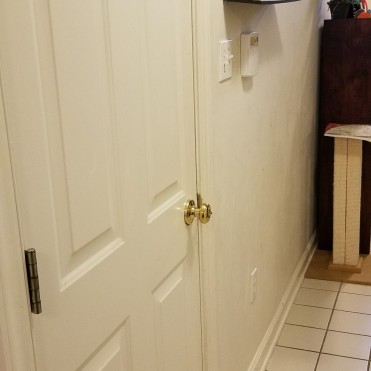 The garage door. Opened at least twice daily to . . .

Bathroom door in the living room, also known as the reading room.

The front door. Other than walking the dogs this week, didn’t go out the front door until Friday. Sad.

My office door. Spent 2 hours straightening things in there today. That’s about as clean as it gets.

The back door. Or, as Oscar and Knox probably think of it — the bathroom door. Haven’t fired up the grill in over 2 months — too long!

The laundry closet. I hate laundry.